What She Left Behind by Tracy Bilen 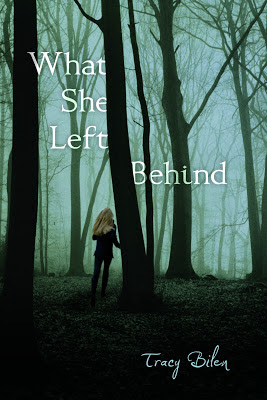 
Don’t even think of leaving… I will find you,” he whispered. “Guaranteed.”

Sara and her mom have a plan to finally escape Sara’s abusive father. But when her mom doesn’t show up as expected, Sara’s terrified. Her father says that she’s on a business trip, but Sara knows he’s lying. Her mom is missing—and her dad had something to do with it.

With each day that passes, Sara’s more on edge. Her friends know that something’s wrong, but she won’t endanger anyone else with her secret. And with her dad growing increasingly violent, Sara must figure out what happened to her mom before it’s too late…for them both.

This book is a fast and relatively easy read, but it isn’t a light and happy read either.  It is a book that could easily be read by a younger reader, and parents would not have to worry about it being really provocative or having lots of profanity. That being said, there is a lot of violence in this book, which may not be suitable for some young readers.

I was pretty please with this debut novel.  There were times when the book seemed to drag a little, but it was never too dull for me.  The book is told more as if you are in Sara’s mind rather than her narrating the book.  Throughout  What she left behind you see her thoughts, and many of her flash backs.  I really enjoyed this feature, because it added depth to the story.

The main character drove me nuts at times.  She was so in denial about what was going on that it just made me want to jump into the book and smack her.  I really enjoyed the supporting characters, such as Alex and Zach.  I loved the way Zach was always there for her, and Alex added the romance element to the book.  I thought Alex and Sara were so cute together.   All together this was a pretty good book, especially if you are looking for a quick and easy read.