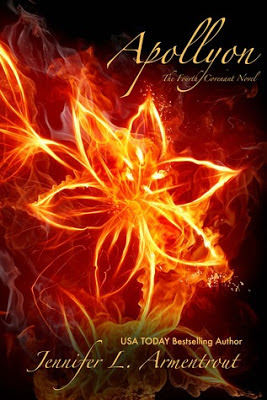 Fate isn't something to mess with and now, neither is Alex. Alex has always feared two things: losing herself in the Awakening and being placed on the Elixir. But love has always been stronger than Fate, and Aiden St. Delphi is willing to make war on the gods and Alex herself to bring her back. The gods have killed thousands and could destroy entire cities in their quest to stop Seth from taking Alex's power and becoming the all-powerful God Killer. But breaking Alex's connection to Seth isn't the only problem. There are a few pesky little loopholes in the whole an Apollyon can't be killed theory, and the only person who might know how to stop the destruction has been dead for centuries. Finding their way past the barriers that guard the Underworld, searching for one soul among countless millions, and then somehow returning will be hard enough. Alex might be able to keep Seth from becoming the God Killer or she might become the God Killer herself.

After reading Deity, I was left with the intense need to what was going to happen next. I both love and hate cliffhangers.  They make for a good ending but waiting for the next book just about kills me.  This book was no exception. By the time Apollyon was released I was dying to read it.

This book had good points and bad points.  I understand the author is probably being rushed to finish these books on a schedule, and that small publishing companies are more likely to miss spelling errors, but the errors in this novel were painfully obvious. Like Deity, this book started out a little slower than the first two novels, but really picked towards the middle and end.  Even with all of this I really enjoyed the book. Just like all of Jennifer’s novels, Apollyon has a great plot line with many twists and turns.  I couldn't in my wildest dream come up with plot twist she creates.

I was very disappointed with Apollo in this book; I had loved his character in the last novel, now I really don’t what to think of him.  The same goes for Seth.  I had just started to like him when he went all dark side.  Can anyone honestly be as naive as Jennifer makes Seth? Any sane person could tell Lucian is using him.  On the other hand I was really happy to see Alex maturing.  She has come a long way from the hot tempered young girl she was in Half-Blood. I really love her strong, witty, and, independent character.  I also love Aiden.  Besides is sweet caring nature, I love how Aiden tries to protect Alex, even though she is far stronger than him.

I love Alex and Aiden as a couple.  The lengths that Aiden goes to for Alex is amazing.  He always believes in her, even when everyone else gives up.  I enjoyed that in this book is that they can be together out in the open, and no longer have to hide their relationship. The way the intimate scenes between the two are written is vague and leaves much to the imagination.   Which I find refreshing from the risque and graphic scenes that are common place.

I really enjoyed this novel, even with the less dramatic ending.  I am still dying to read Sentinel.