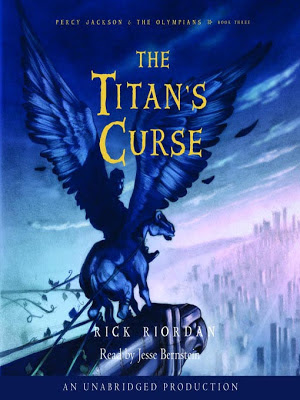 When the goddess Artemis goes missing, she is believed to have been kidnapped.And now it's up to Percy and his friends to find out what happened. Who is powerful enough to kidnap a goddess? They must find Artemis before the winter solstice, when her influence on the Olympian Council could swing an important vote on the war with the titans. Not only that, but first Percy will have to solve the mystery of a rare monster that Artemis was hunting when she disappeared -- a monster rumored to be so powerful it could destroy Olympus forever.

I don’t often read middle grade novels, but I have fallen in love with this series.  Rick Riordan’s writing captures the imagination.  Maybe it’s his characters, maybe it’s his descriptions, maybe it’s the plot line, or maybe it’s a combination of all three.  Whatever it is I could not put this novel down.

This book brings back many of the characters we have come to know and love, but also introduces many lovable new characters.  My favorite character would have to be Zoe.  She starts the novel as one of Artemis’s huntresses. She seems very reserved and often very cold at the beginning of the novel, but as the book continues her softer more vulnerable side starts to show.  This book also introduces Nico and Bianca.  Nico doesn’t play a huge role in this novel, but I think that will change with the next novel.  As for Bianca I didn’t care for her.  I don’t know if it was her choices in the beginning or just the way her character was written, but I couldn’t get into her character.

I love this series.  With every book I grow to like it more.  This book is action packed, fast paced, and very funny.  It has twists and turns you never see coming.  All this is great but the part that impresses me the most is how Rick Riordan weaves all the myths around our modern society, and he does it accurately.