You are Mine (Mine #1) by Janeal Falor 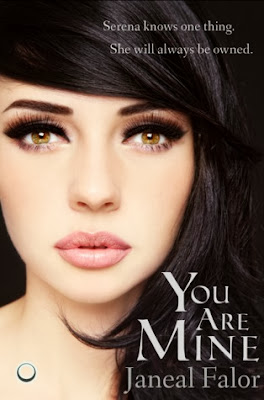 Serena knows a few simple things. She will always be owned by a warlock. She will never have freedom. She will always do what her warlock wishes, regardless of how inane, frivolous, or cruel it is. And if she doesn’t follow the rules, she will be tarnished. Spelled to be bald, inked, and barren for the rest of her life—worth less than the shadow she casts.

Then her ownership is won by a barbarian from another country. With the uncertainty that comes from belonging to a new warlock, Serena questions if being tarnished is really worse than being owned by a barbarian, and tempts fate by breaking the rules. When he looks the other way instead of punishing her, she discovers a new world. The more she ventures into the forbidden, the more she learns of love and a freedom just out of reach. Serena longs for both. But in a society where women are only ever property, hoping for more could be deadly.

Wow... Just wow. I really do not know what else to say for this novel.  The moment I picked up the book I was hooked.  It was very well written, and had few noticeable errors.  Janeal Falor spun an intricate tale of magic and romance all told in a world very different from our own.   As a woman Serena is nothing more than a possession. She is expected to be submissive to the male head of the household.  Since only men can wield magic women are only worth the amount of magic their blood possesses.  The more magic within them the more they are sold for.

I was rather annoyed with Serena in the beginning.  She, as well as her sisters, conformed to society and never tried to break away.  I had to stop and remind myself that this lifestyle is all they have ever known and this was the norm for all women.   Serena becomes more brazen as the novel goes on.  She starts to do as she wishes instead of what society intends for her.  The more confident Serena became the more she grew on me.  Her betrothed on the other hand I liked from the beginning.  There was something different about him.  Being a foreigner, he is considered barbaric by the people of Chardonia. Yet he is sweet and kind, and treats Serena as his equal.

This novel was an enthralling read.  I was hooked from the beginning.  I was able to guess some of the events before I read them, but this however did not deter me from reading.   I was left wanting more, and I cannot wait for the next book.