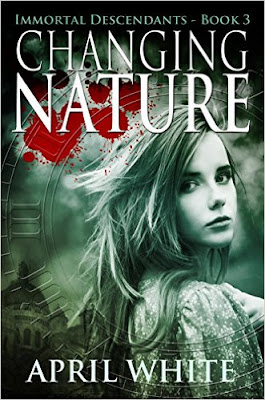 Saira and Archer’s romantic London summer is shattered by the bold kidnappings of Immortal Descendants. It’s clear Mongers want control of the Descendant Families, and when they target a powerful Shifter, there’s no doubt they will eliminate anyone who stands in their way.

A split in time could be the cause of this new Monger aggression, and Saira, Archer and Ringo suspect their time-traveling nemesis Bishop Wilder. One dangerous world is exchanged for another when Saira and her friends track Wilder to the gloomy streets of Paris in 1429. They find the city besieged by marauding wolves led by a fanatical peasant girl who will be known to history as Joan of Arc.


Crossing the time stream to repair it has dropped them into the heart of the Hundred Years’ War on the eve of an epic battle, where the line between friends and enemies will be drawn in blood. To finally end the deadly game of cat and mouse with Wilder, Saira must confront her greatest challenge yet: the truth about her changing Nature.

Changing Nature was another home run for author April White.  This installment of The Immortal Descendants is action packed, face paced, and comical.  She never fails to entice her readers with her unique storylines and stellar characterization.  In Changing Nature, April White brings back the beloved characters from the first book as well as adding some new characters to the mix.  I think this is her best work yet.

What really sets April White apart from other authors is her ability to incorporate true events from history into her novels. It never ceases to amaze me the detail she puts into her stories, and this story is no exception. April White is able to beautifully blend the story of Joan of Arc into her novel, and while she did take some liberties, she did a phenomenal job of doing so.  She managed to take a historical figure that I have always admired for her bravery, and turn her into a character that I despised.  I was not expecting to have a person from history that is usually viewed as a heroine to end up being such a vile character throughout the book, but April White did it.  And she did it flawlessly.

As per usual, April White did an amazing job with all of her characters, I still love Saira, Archer, and Ringo, but the character that really floored me in this book was Connor.  As the reader, I really got to see Connor come into his own in this book.  He becomes so grown up for someone so young; seeing him develop into a young man was a nice touch on April’s part.  I really grew to love Connor throughout reading this novel, and really hope to see more of him throughout the next book.

All in all, April White has done a phenomenal job on this book, and series as a whole.  I love her reading her works so much, each on is more enticing than the next.  They have everything a reader could want, great story line, amazing characters, plot twists that come out of nowhere, and moments that tug at your heart strings. I am definitely a lifelong fan of her work.