City of Fallen Angels by Cassandra Clare (The Mortal Instruments #4) 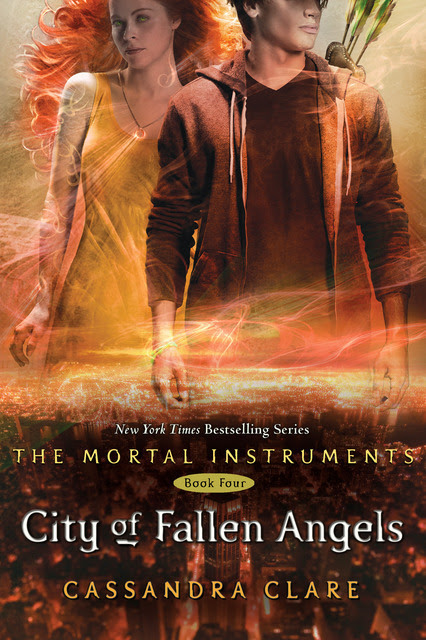 The Mortal War is over, and sixteen-year-old Clary Fray is back home in New York, excited about all the possibilities before her. She’s training to become a Shadowhunter and to use her unique power. Her mother is getting married to the love of her life. Downworlders and Shadowhunters are at peace at last. And—most importantly of all—she can finally call Jace her boyfriend.

But nothing comes without a price.

Someone is murdering Shadowhunters, provoking tensions between Downworlders and Shadowhunters that could lead to a second, bloody war. Clary’s best friend, Simon, can’t help her—his mother just found out that he’s a vampire, and now he’s homeless. When Jace begins to pull away from her without explaining why, Clary is forced to delve into the heart of a mystery whose solution reveals her worst nightmare: she herself has set in motion a terrible chain of events that could lead to her losing everything she loves. Even Jace.

I have been a longtime fan of the Mortal Instruments series.  I believe that the series was originally meant to be a trilogy, and the third book ended quite nicely so I was surprised to see the fourth book hit the shelves.  I will not lie it took me a while to muster up the courage to read this book, I think mostly because of how nicely Clare had tied up the third book, and to be honest it was a little of a letdown for me.

This book felt forced and a little unnecessary to me.  It for me did not have the face paced and action filled plot that I felt the first three books contained.  This book is very much a filler-type-novel.  There was a lot of buildup and not much action until the very end.  However, I can see why Cassandra Clare did this it is a good set up for the next two novels, hopefully, they will have a faster more action filled plot.

This book was by no means bad however, I did enjoy that fact that is was smaller than the other books in the series and was a pretty fast read as well it brought back the characters that I have come to know and love throughout the series.  I do hope, though, that they bring back the snarky Jace that we saw in the first books.  This book also gives me high hopes for the fifth and sixth books.  I think that overall that even though this was not my favorite book in the series it was still by most standards a decent book, and will be a good lead up to the next books in the series.
Posted by Literary Chaos at Wednesday, May 25, 2016