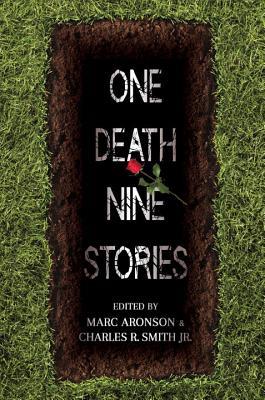 How could one teenage boy’s life elicit other kids’ first experiences — even after he dies? Nine interconnected stories from nine top YA writers.

Kev’s the first kid their age to die. And now, even though he’s dead, he’s not really gone. Even now his choices are touching the people he left behind. Ellen Hopkins reveals what two altar boys (and one altar girl) might get up to at the cemetery. Rita Williams-Garcia follows one aimless teen as he finds a new life in his new job — at the mortuary. Will Weaver turns a lens on Kevin’s sister as she collects his surprising effects — and makes good use of them. Here, in nine stories, we meet people who didn’t know Kevin, friends from his childhood, his ex-girlfriend, his best friend, all dealing with the fallout of his death. Being a teenager is a time for all kinds of firsts — first jobs, first loves, first good-byes, firsts that break your heart and awaken your soul. It’s an initiation of sorts, and it can be brutal. But on the other side of it is the rest of your life.

To be frank, this anthology was not for me.  I was so excited by the idea of so many well-known authors coming together to create an anthology based around one central character. I had such high hopes for this book, but in the end, it just didn't live up to my expectations.  I think that the biggest flaw for me was the fact that I really had a hard time trying to connect that stories to one another, it just felt too disjointed for my liking.

Some of the stories, particularly the first couple, were really interesting and I could understand how they were connected to one another, they really helped build Kevin's character and give us an insight into his history, but many of the later stories lacked the cohesion and felt as if they didn't really belong in this anthology. I felt like they could have added in some different stories that would have given the book more depth and helped to interconnect the stories better.  I also wish that this story would have had a better conclusion.  The last story just left me hanging, and not in the exciting cliffhanger way.  It just felt as if another story was needed to try and tie everything together.

This being said I can appreciate what the writers were attempting to do.  It must be difficult to try and create one cohesive story with so many different writers and storylines going, and I commend them for their efforts.  I like the idea of interconnecting the stories and would be open to reading more like it in the future, however, this one, at least for me, fell flat.