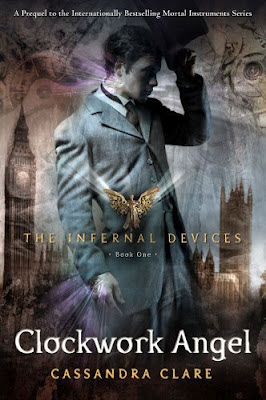 When sixteen-year-old Tessa Gray crosses the ocean to find her brother, her destination is England, the time is the reign of Queen Victoria, and something terrifying is waiting for her in London's Downworld, where vampires, warlocks and other supernatural folk stalk the gaslit streets. Only the Shadowhunters, warriors dedicated to ridding the world of demons, keep order amidst the chaos.

Kidnapped by the mysterious Dark Sisters, members of a secret organization called The Pandemonium Club, Tessa soon learns that she herself is a Downworlder with a rare ability: the power to transform, at will, into another person. What’s more, the Magister, the shadowy figure who runs the Club, will stop at nothing to claim Tessa's power for his own.

Friendless and hunted, Tessa takes refuge with the Shadowhunters of the London Institute, who swear to find her brother if she will use her power to help them. She soon finds herself fascinated by—and torn between—two best friends: James, whose fragile beauty hides a deadly secret, and blue-eyed Will, whose caustic wit and volatile moods keep everyone in his life at arm's length . . . everyone, that is, but Tessa. As their search draws them deep into the heart of an arcane plot that threatens to destroy the Shadowhunters, Tessa realizes that she may need to choose between saving her brother and helping her new friends save the world. . . . and that love may be the most dangerous magic of all.

As a fan of the Mortal Instruments series, I was a little worried that I wouldn’t like the prequel.  I have never been one for historical fiction so I was worried about being let down by this book.  I couldn’t have been more wrong.  I absolutely loved this book.  The book caught my interest quickly and did not let go.  I was worried I wouldn’t like the character because I was so attached to the ones in the Mortal Instruments, but I wound up loving the characters.  I especially love Will and Jem they are total opposites but they complement and add to the book.  Will was constantly making me laugh with his snarky attitude and comments, but Jem made me smile with his kindness.  I loved all the characters, but one character that really stuck out to me was Henry.  Henry was funny and quirky, his inventions always made me laugh.  This book was very descriptive; I felt as if I had escaped into another world.  Though she was descriptive I didn’t feel she was over descriptive like some authors could be.  The book was a great story and a fast read, considering how long it was.


I have already read Clockwork Angel but I saw the audiobook in my local library, and I couldn’t resist.  This was my first audiobook, and I had a pretty good experience.  I really liked the book being read out loud to me.  It helped me to pick up on some small things that I did not when I read the book.  The reader did a great job of switching from American and British accents.  Even my mom, who lived in England for many years, thought she did a good job.  I found the readers voice to be soothing, but the way she talked when the characters were yelling got on my nerves at times.  Another thing that I really liked was that all of the characters had a different voice; the listener could tell who was talking at all times.  One thing that really got on my nerves was Gabriel Lightwood’s voice!  He sounded like Elmer Fudd to me and I couldn’t take him seriously.  Other than those couple things I really liked the way she read, and her voice was pleasant.

As for the book, I loved it even more the second time.  Since I knew what was going to happen I was able to listen for small details I miss when I first read the book.  I loved the plot and the characters.  They all came alive in this book, it was so amazing.  I had forgotten some of the things that had happened in the book and I was great to go back and listen to it again.