The Eyes of the Dragon By Stephen King Audiobook 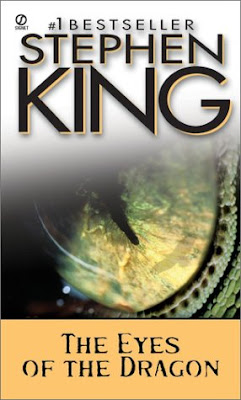 A tale of archetypal heroes and sweeping adventures, of dragons and princes and evil wizards, here is epic fantasy as only Stephen King could envision it.
The number-one New York Times best seller - the prelude to the classic Dark Tower series

This book was so different from all of the Stephen King books I have seen.  I must say I really liked this book.  The plot and way the book was written were rather imaginative.  Instead of having a normal narrator, the story was told from the eyes of a storyteller, which I thought went along well with the books setting.   Stephen King was very descriptive and detail oriented in this book.  There are certain scenes that I cannot get out of my head.   I was rather hoping there would be a sequel, but I was out of luck.  I cannot wait to read the Dark Tower series, which has some of the same characters.