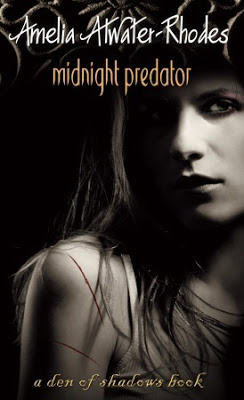 Though she was once a happy teenager with a wonderful family and a full life, Turquoise Draka is now a hunter. In a deadly world of vampires, shapeshifters, and mercenaries, she’ll track any prey if the price is right. Her current assignment: to assassinate Jeshikah, one of the cruelest vampires in history. Her employer: an unknown contact who wants the job done fast. Her major obstacle: she’ll have to hide her strength and enter Midnight, a fabled vampire realm, as a human slave. . . .

Of the four books in the quartet I read, this one was my favorite.  I really enjoyed reading this book, because it was very different from her other books.  The book was rather creepy, due to the fact that it was centered on humans being slaves to vampires.  She uses the same world, but the old rules vampires followed, and you learn in the books before do not seem to apply.  I found myself being horrified by some of the vampires’ treatments of “their” humans.

Though I hated her name, I liked the character Turquoise. She is strong, smart, and witty.  I felt really bad for her, especially as you learn what happened to her.  By far my favorite character was Jaguar.  He isn’t technically a good guy, but he isn’t the bad guy either.  He is a vampire and he does own slaves, which I don’t condone, but he is so sweet and has such a playful demeanor.  I couldn’t help but love him.  Even if you don’t read the other books, I would encourage you to read this one.  It’s really good and quick read.
Posted by Literary Chaos at Saturday, January 26, 2013