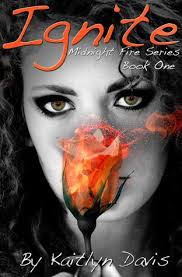 When Kira Dawson moves to South Carolina, she meets Luke, a blond goofball who quickly becomes her best friend, and Tristan, a mysterious bad boy who sends shivers down her spine. Kira knows they're keeping secrets, but when she discovers Tristan's lust for blood and her own dormant mystical powers, Kira is forced to fight for her life and make the heartbreaking decision between the familiar comfort of friendship and the fiery passion of love.

From bestselling author Kaitlyn Davis comes a paranormal romance perfect for fans of Twilight, The Vampire Diaries, and Buffy The Vampire Slayer. Ignite is the first book in the Midnight Fire series and it is approximately 65,000 words.

*warning a very small spoiler in the review. *


This novel is just too similar to so many others in the young adult genre.  From the moment I started reading, the novel reminded me of a sad rehashing of twilight. Young angsty teen moves to new school, check; she befriends the “odd” group, check; she develops an infatuation with a young brooding man in school, check, brooding man is not what he appears to be, check; and finally, a book full of clichés, check.  What sets this apart from twilight, is that the romance seemed not only cliché but very forced.  The entire time she was brooding over her love for Tristian, I was trying not to bang my head against the wall.

If it were just the romance and the cliché of the novel I could have read it as light and easy read, but I could not get past some of the obvious inaccuracies this book contained. In the novel, the main character miraculously remembers her parent’s death at an opportune time, even though she was only an infant at the time.  This just struck me as very far-fetched. Some might argue that she is technically a magical being, therefore might be able to retain memories earlier, however, the author never made mention of any other abilities than to channel the sun.  The girl seems to be an average human other than this one ability, and I just found it impossible that she would suddenly regain this memory, and have such clarity about said memory.  My other gripe was toward the end of the novel she is coming out of a coma and seems physically fine.  She seems completely normal, and the coma does not seem to have affected her in any way. I asked some of my family members who work in the medical field if this was usually accurate.  After three months in a coma, she would more than likely need to have some form of physical therapy.  However, I will give her that the coma was induced by her powers, so maybe that is why she came out fine. For me, however, it was just a little too perfect.

All this aside, the book is free.  So, while I was hard on the book, and it was not my cup of tea, that does not mean that it might not be a fun read for someone else, and it will not set anyone back if they decide to try it.  I still hold out hope that I will like the next book, and will try it out in the near future.
Posted by Literary Chaos at Tuesday, January 24, 2017