The Dead House by Dawn Kurtagich 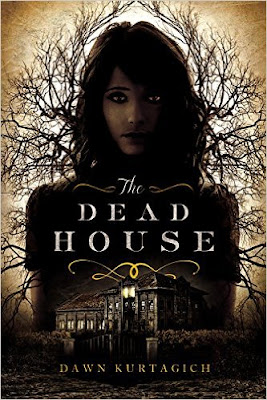 Welcome to the Dead House.

Carly Johnson: vanished without a trace.

Two decades have passed since an inferno swept through Elmbridge High, claiming the lives of three teenagers and causing one student, Carly Johnson, to disappear. The main suspect: Kaitlyn, "the girl of nowhere."

Kaitlyn's diary, discovered in the ruins of Elmbridge High, reveals the thoughts of a disturbed mind. Its charred pages tell a sinister version of events that took place that tragic night, and the girl of nowhere is caught in the center of it all. But many claim Kaitlyn doesn't exist, and in a way, she doesn't - because she is the alter ego of Carly Johnson.

Carly gets the day. Kaitlyn has the night. It's during the night that a mystery surrounding the Dead House unravels and a dark, twisted magic ruins the lives of each student that dares touch it.

Debut author Dawn Kurtagich masterfully weaves together a thrilling and terrifying story using psychiatric reports, witness testimonials, video footage, and the discovered diary - and as the mystery grows, the horrifying truth about what happened that night unfolds.

I just happened to pick up this novel on a whim during a visit to my local Barnes and Nobel, and I have to say it is probably one of my better picks.  I originally pick the book because of its unconventional formatting.  That is, that this story is told completely from diary entries, doctors transcripts, and video transcripts.  This type of layout was not something I had really seen before; I was intrigued by how such a novel would read: would there be gaps in the story, how would it flow between each section, how would the video transcripts translate into the story, etcetera.

I was pleased to find that the book transitions very well from section to section, it never felt choppy or disjointed, and when there was a gap in the story it was purposefully placed to add to the aura of suspense. This layout also lends to a very well-paced read, and one that would be suitable novel for those who may not be avid readers. I say this because the constant changes from diary entries to doctor’s transcripts, to interrogation transcripts, and then to video transcripts keep the reader from feeling like they are reading a traditional book.

The formatting is not the only strong point this book has.  In fact, the strongest point would have to be the story its self.  This novel has an amazing plot line. The diary entry and transcripts format allows the reader to vividly see the heroine’s descent into madness in a way that would have been difficult to achieve in any other way.  This is perfect for the person who likes the book that will keep you guessing.  It has the best of both worlds, part psychological thriller, part supernatural mystery.

Over all this book is great for those who may not be the biggest fans of reading, it would also be good for those who love suspenseful novels.
Posted by Literary Chaos at Sunday, January 15, 2017