The Dead House:Naida: A Companion Novella by Dawn Kurtagich 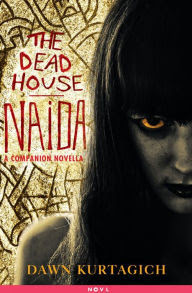 A digital short story from The Dead House author Dawn Kurtagich
There is a box. A box that should never have been discovered. And a warning beneath the lid.
This was for Kaitlyn. It was a mistake. Forget this box and leave the Isle. Don't look any further.
I'm begging you. N.C.D. 2005
After the inferno that swept through Elmbride High, claiming the lives of three teenagers and causing one student, Carly Johnson, to disappear, Naida Chounan-Dupre was locked away for the good of society.
But that wasn't the end of the story.
Because you can't play with the devil and not pay the price.
The chilling, psychological horror of The Dead House returns with never-before-seen footage of the Naida tapes.

This novella takes place after the events of the Dead House, and now is centered around Naida rather than Kaitlyn.  In particular, the story line comes from Naida’s diaries and video transcripts; it is through Naida’s eyes that both stories truly come to fruition.

The Dead House, was a novel that was part psychological thriller part supernatural suspense. It was the kind of story that keeps people on their toes, but what it didn’t have was a concrete ending. For a reader like me, that is beyond irritating.  I want an ending that does not leave me guessing.  The Dead House did not give me that, and that is where this novella comes in.  It gives the reader that solid ending that many readers crave.

The story, though short, is very captivating, and well-paced.  The author managed to create a full plot in less than one hundred pages.  That, itself is no easy feat, but then add the unique and suspenseful writing style of the author, and you get a one of a kind novella.
Posted by Literary Chaos at Monday, January 23, 2017