The Lost Hero (The Heroes of Olympus #1) by Rick Riordan 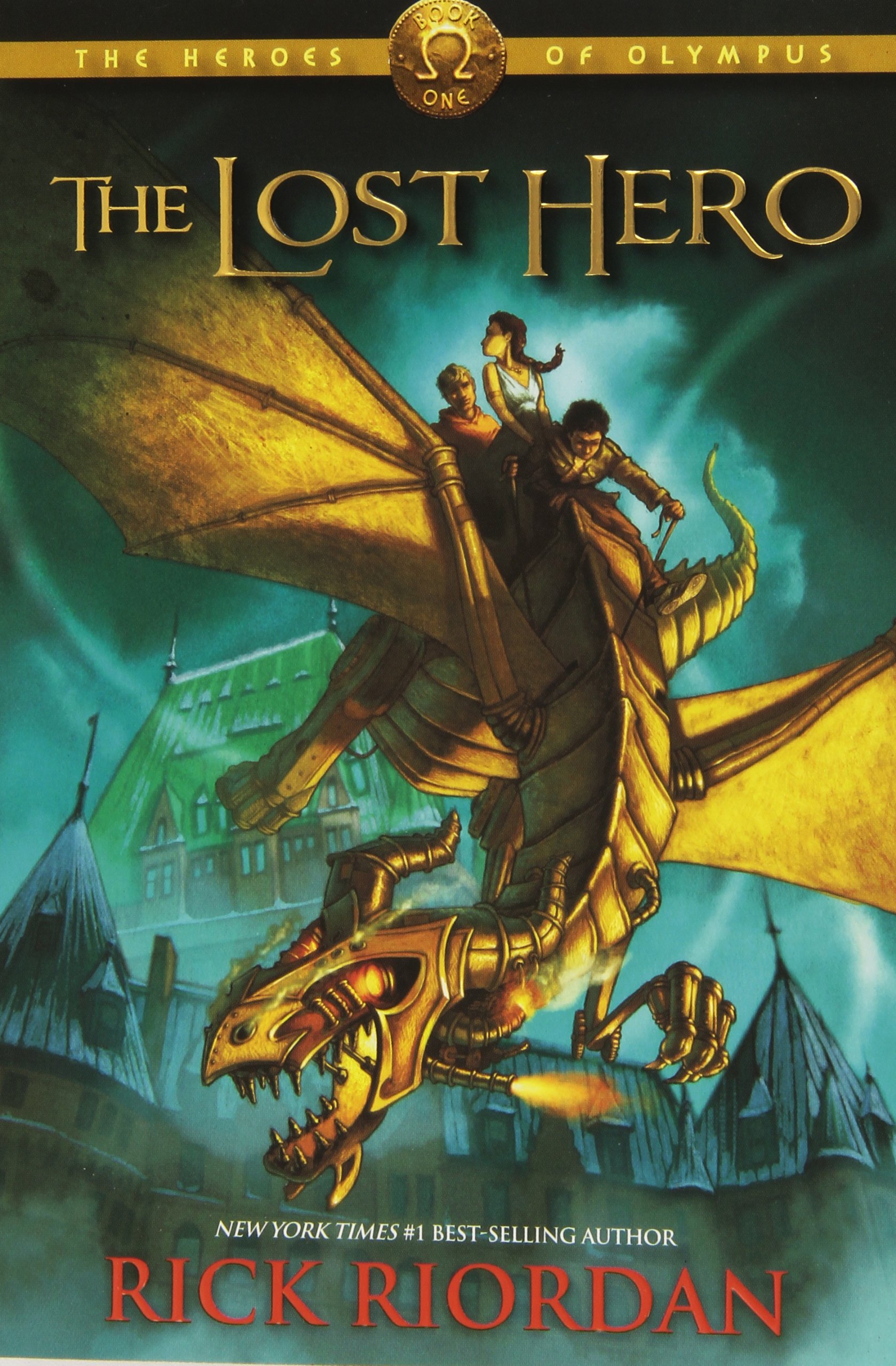 Jason has a problem.
He doesn’t remember anything before waking up in a bus full of kids on a field trip. Apparently he has a girlfriend named Piper, and a best friend named Leo. They’re all students at a boarding school for “bad kids.” What did Jason do to end up here? And where is here, exactly?

Piper has a secret.
Her father has been missing for three days, ever since she had that terrifying nightmare about his being in trouble. Piper doesn’t understand her dream, or why her boyfriend suddenly doesn’t recognize her. When a freak storm hits during the school trip, unleashing strange creatures and whisking her, Jason, and Leo away to someplace called Camp Half-Blood, she has a feeling she’s going to find out.

Leo has a way with tools.
When he sees his cabin at Camp Half-Blood, filled with power tools and machine parts, he feels right at home. But there’s weird stuff, too—like the curse everyone keeps talking about, and some camper who's gone missing. Weirdest of all, his bunkmates insist that each of them—including Leo—is related to a god. Does this have anything to do with Jason's amnesia, or the fact that Leo keeps seeing ghosts?


WARNING THIS REVIEW HAS MINOR SPOILERS

Anyone who knows me or has read my reviews knows that I am a huge fan of Rick Riordan's books. This book was no exception. It had everything I have come to expect from his works: a great plot, lots of humor, intricate tellings of mythology, and a fantastic cast of characters. This book is over 500 pages and a managed to read, or rather listen to, the entire book in a matter of a couple of days.

When I was told that this series would feature Roman gods, was a little skeptical of how he would pull that off, but he did and did so well.  Not only does he present the Greek and Roman counterparts in a way that makes sense, but he also does it in a way that, for myself as a reader, I found very intriguing.  I am very excited to see the differences in the personalities of the Greek versus Roman Gods and Goddesses, and how this will affect the Demi-gods and the world as a whole.


While I liked many of the characters, Leo was by far my favorite.  He was witty and humorous, all the chapters from his point of view made me chuckle.  I really enjoyed that he was not cocky, he had self-doubt, but he always managed to find a way to prevail. Not to mention his back story was so sad, it made me want to hug the poor thing.  Honestly, I just want a book written entirely from Leo's point of view.

I really enjoyed Piper's character as well.  She is the child of Aphrodite, and I really enjoyed getting to see a child of Aphrodite being more than a pretty face. In the Percy Jackson series, the reader doesn't see much of the children of Aphrodite and when we do they are usually described as putting on makeup or as very vain. In many ways the Aphrodite cabin seemed, to me at least, to be written off.  The one exception being Selena Beauregard, but she was a minor character who didn't have a ton of Character Development until the final books in the Percy Jackson series.

Then there was Jason.  Honestly, I don't know how I feel about his character yet. I really wanted to love his character but, but I didn't.  Don't get me wrong, I liked him enough.  I didn't find him to be a bad character, he just didn't compare to Percy.  Jason was just kind of bland at times, and I found myself wishing that Percy was in the book.

This book was told from all three of the main characters perspectives, which is a writing style that is hit or miss for me, however, I actually enjoyed that this book was told from all three perspectives.  Since I didn't really enjoy Jason's character, I don't know that I would have really liked the book if it was told completely from his perspective.  By adding in Piper and Leo, the book gained a lot of depth and comic relief that, in my opinion, were vital to this book.

One thing that really surprised me was the ending of this book.  Usually, Rick Riordan has a pretty strong resolution to his stories. That is to say, he tends to tie up the stories in a nice little bow at the end with maybe a small tidbit of what is to come in the next book.  He did not take that approach with this book.  Instead, he went out with a bang and left it on a cliff hanger, and to be honest I really liked the ending.

In total, I really enjoyed this book.  The reason that it did not receive a full five stars is two-fold, I didn't love Jason's character and I really wanted to see more of the characters from the Percy Jackson series. Based on the ending, I think I will get that in the next book, and I cannot wait!

My Thoughts on the Audio Book:

I was not a huge fan of the Narrator for the Percy Jackson and the Olympian's series and was very happy to find that I really enjoyed this narrator. Joshua Swanson was the narrator for this book, and I think he did a really amazing job.  He had really good rhythm and inflection to his voice.  I never felt bored by his voice.  I really enjoyed the voices he did for the book.  They were all very unique and made it easy to tell one character from another.  It never felt cheesy or over the top.  Overall, if you are wanting to listen to this story, I  would definitely recommend the audiobook.