Top Ten Tuesday is a weekly bookish meme hosted by That Artsy Reader Girl.  This week's topic is Ten Most Recent Additions to your TBR Pile.   This one is a bit of stretch for me,  I have really been focusing on my current TBR and haven't been adding a ton to my TBR pile recently. 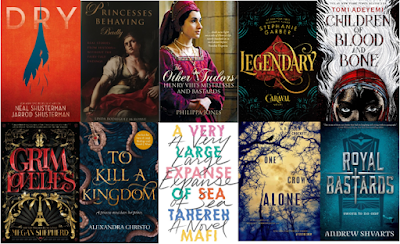 Dry by Neal and Jarrod Schusterman
Princesses Behaving Badly by Linda Rodriguez McRobbie
The Other Tudors King Henry VIII's Mistresses and Bastards by Philippa Jones
Legendary by Stephanie Garber
Children of Blood and Bone by Tomi Adeyemi
Grim Lovelies by Megan Shephard
To Kill a Kingdon by Alexandra
A very Large Expense of Sea by Tehereh Mafi
One Crow Alone by S.D. Crockett
Royal Bastards by Andrew Shvarts