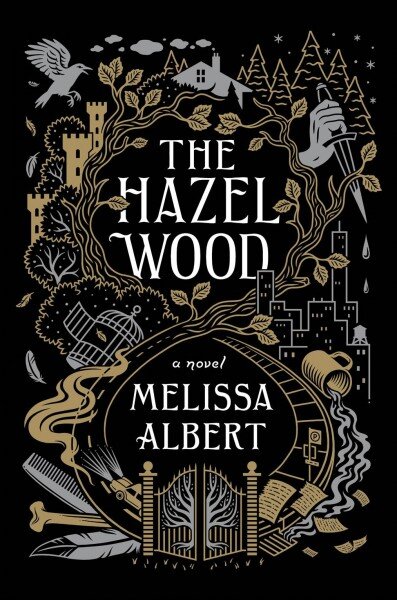 Seventeen-year-old Alice and her mother have spent most of Alice’s life on the road, always a step ahead of the uncanny bad luck biting at their heels. But when Alice’s grandmother, the reclusive author of a cult-classic book of pitch-dark fairy tales, dies alone on her estate, the Hazel Wood, Alice learns how bad her luck can really get: Her mother is stolen away―by a figure who claims to come from the Hinterland, the cruel supernatural world where her grandmother's stories are set. Alice's only lead is the message her mother left behind: “Stay away from the Hazel Wood.”

Alice has long steered clear of her grandmother’s cultish fans. But now she has no choice but to ally with classmate Ellery Finch, a Hinterland superfan who may have his own reasons for wanting to help her. To retrieve her mother, Alice must venture first to the Hazel Wood, then into the world where her grandmother's tales began―and where she might find out how her own story went so wrong.

I really expected to love this book.  I really wanted to love this book. I was so excited by the synopsis.  I love retellings and fairytale based stories, and this one sounded like the kind of book I could lose myself in. Between the synopsis and all the hype in the bookish community, I had high expectations for this book.  Unfortunately, this book fell flat for me.  That is to say, I found the story enjoyable, but I did not love it in the way that I had hoped I would.

I felt like this story could have had better pacing.  I really wanted more fantasy and fairytale elements.  I really enjoyed the sections of the book that were set in the Hinterland, such as the fairytale chapters dispersed throughout the book, if there had been more of the story set in the Hinterland, I feel like I would have liked the story much more, but instead, the majority of the book was a road trip that I at least found rather boring.

It also did not help that Alice is one of the least likable characters I have ever read.  She was so rude, selfish, and ill-tempered.  She constantly talked about her anger issues, and it often felt to me like she was making excuses for her behavior instead of trying to learn from her behavior and fixing it.  I understand that her behavior is an important aspect of the story, but it did not make her character any more bearable.

Then there was the way that she treated Finch.  She was so rude to him, it really irritated me.  This person is helping her, and yet she was so ungrateful. I felt like she so stuck in her own pity party that she didn't notice or understand her privilege and the inequality around her.  What was worse for me there seemed to be very little growth in this aspect.  I wanted a good redemption arc, I wanted realization of her privilege and her selfishness.  Unfortunately, I did not get that.

I feel like this is one of those polarizing books that people either really love or really dislike.  I personally fell in the middle I enjoyed it, but I didn't love it. I felt like it this was over-hyped, at least for my reading tastes. This book does have good aspects to it and I can see why some people really loved this story.  It just wasn't for me.