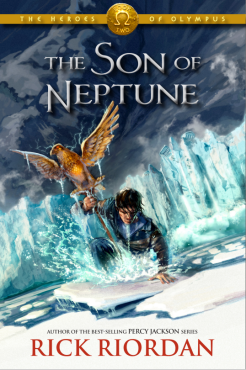 Percy is confused. When he awoke from his long sleep, he didn't know much more than his name. His brain fuzz is lingering, even after the wolf Lupa told him he is a demigod and trained him to fight with the pen/sword in his pocket. Somehow Percy manages to make it to a camp for half-bloods, despite the fact that he has to keep killing monsters along the way. But the camp doesn't ring any bells with him. The only thing he can recall from his past is another name: Annabeth.

Hazel is supposed to be dead. When she lived before, she didn't do a very good job of it. Sure, she was an obedient daughter, even when her mother was possessed by greed. But that was the problem—when the Voice took over her mother and commanded Hazel to use her "gift" for an evil purpose, Hazel couldn't say no. Now because of her mistake, the future of the world is at risk. Hazel wishes she could ride away from it all on the stallion that appears in her dreams.

Frank is a klutz. His grandmother says he is descended from heroes and can be anything he wants to be, but he doesn't see it. He doesn't even know who his father is. He keeps hoping Apollo will claim him, because the only thing he is good at is archery—although not good enough to win camp war games. His bulky physique makes him feel like an ox, especially in front of Hazel, his closest friend at camp. He trusts her completely—enough to share the secret he holds close to his heart.

Beginning at the "other" camp for half-bloods and extending as far as the land beyond the gods, this breathtaking second installment of the Heroes of Olympus series introduces new demigods, revives fearsome monsters, and features other remarkable creatures, all destined to play a part in the Prophesy of Seven.

I loved this book, but this was no surprise to me.  I have yet to read a book from Rick Riordan that I did not like.  However, I was a little surprised to find that I liked this book even more than the first book.  I attribute most of this to the fact that Percy returns in this book! Percy is a character that I already know and love, and throughout much of the first book, I found myself hoping that Percy would return.  I love his quirky personality and his sense of humor.  I have said it before and will continue to say it, Percy is one of my favorite perspectives to read from. He never fails to make me laugh.

Rick Riordan simply has a way with characters.  I love all the characters he introduces.  Frank and Hazel were no exception. Frank is such a cute little klutz and Hazel was so sweet to Percy when he had amnesia, I ended up loving them both right away.  Riordan always has a way of writing such great chemistry between characters.  I love reading the way the characters interact with one another, and how the friendships and cute but awkward romances progress.

I will say that the book felt a little long and at times it felt a little slow, but for some reason, I did not mind.  Maybe it is the fact that I know the story is building up to an even bigger plot and that I know that many of the characters I love will be returning in this series, or maybe it is simply that I love the characters and the world so much that the slower plotline did not bug me.  Either way, I still loved this book and would recommend anyone who has read the Percy Jackson and the Olympians definitly NEED to read this as well.

My Thoughts on the Audiobook:

The narrator for this audiobook was Joshua Swanson.  He also read The Lost Hero, and I thought he did an excellent job on both books.  He has great pacing and inflection.  He really brings the characters to life, without it feeling overdramatic or corny. I also did not find inconsistencies in the pronunciation like I did with the narrator for the Percy Jackson and the Olympians series. If I had to recommend one format to read this book in, I would definitely recommend the audiobook.  The narration and the different voices just really makes the story come to life in a way that I personally really enjoy.  It also means you as a reader do not have to try and figure out how to pronounce all the Greek and Roman names which is always nice.  😂
Posted by Literary Chaos at Friday, February 08, 2019