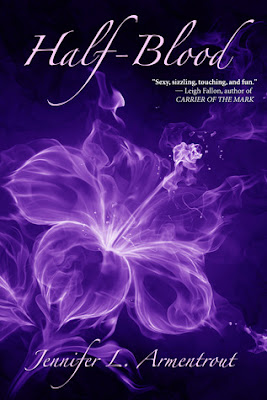 The Hematoi descend from the unions of gods and mortals, and the children of two Hematoi-pure-bloods-have godlike powers. Children of Hematoi and mortals-well, not so much. Half-bloods only have two options: become trained Sentinels who hunt and kill daimons or become servants in the homes of the pures.Seventeen-year-old Alexandria would rather risk her life fighting than waste it scrubbing toilets, but she may end up slumming it anyway. There are several rules that students at the Covenant must follow. Alex has problems with them all, but especially rule #1:Relationships between pures and halfs are forbidden.Unfortunately, she's crushing hard on the totally hot pure-blood Aiden. But falling for Aiden isn't her biggest problem--staying alive long enough to graduate the Covenant and become a Sentinel is. If she fails in her duty, she faces a future worse than death or slavery: being turned into a daimon, and being hunted by Aiden. And that would kind of suck
.
This book had me hooked from the very beginning.  I absolutely loved this book.  It was fast paced, well written, and action packed.  The author did an amazing job creating a world very different from our own.  I have seen many reviews criticizing the novel due to its similarity to the Vampire Academy.  I do not agree with their criticism.  Granted they are similar in the beginning, especially with the half-blood pure blood thing, but this book holds its own. I found these characters far more believable and likeable then the characters in Vampire Academy (I found Lissa to be annoying and Rose just not a really likable character).  And I feel this book had far more action in it then in the Vampire Academy, which seemed really slow and dull to me.  Honestly except for the beginning the book really wasn’t that similar to Vampire Academy.  I don’t really like to compare novels to each other, but in this case I must say that this novel far exceeds Vampire Academy. The plot line is amazing.  It starts out at a sprint and doesn’t slow down.  The book has many twists, some of which I saw coming; others that blew me away. The best feature of this story is the characters.  The author does a great job with developing all the characters.   Alexandria is my favorite.  She is brave, strong-willed, witty, irrational, can be violent, and sometimes vain. She is a strong female lead, which is something I wish there were more of in Young Adult fiction. Alex is great, but the book wouldn’t be anything without the other characters.  I found I could never put down this book, not at night, nor at school (which got me in some trouble).  I cannot wait to read Pure!
Posted by Literary Chaos at Friday, March 29, 2013